Statistics show that each person in the UK will have around 11 different employers during their lifetime. This means they could potentially have 11 separate pension pots to try and keep track of, not including their state pension – so it comes as no surprise that there is an estimated £400million in unclaimed pensions in the UK. To try and combat this in order to help more people keep an accurate account of their pensions, the idea for a ‘pensions dashboard’ was created. Short term loan provider, Mr Lender, took a look at how the new dashboard could help you save for retirement and stop you from missing out on unclaimed cash. 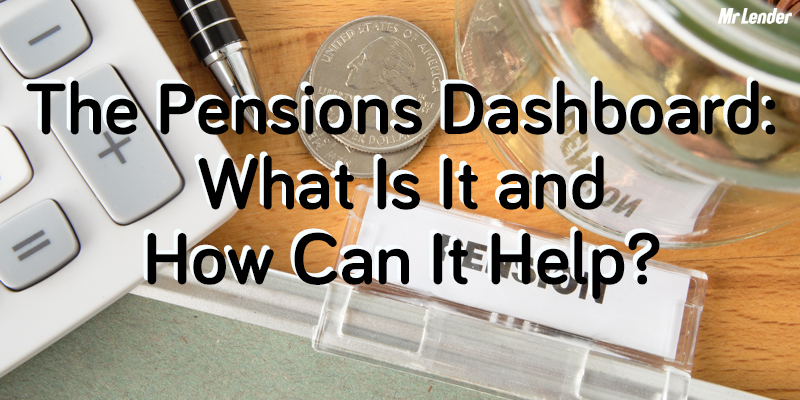 First announced in the 2016 Budget, the pensions dashboard is now set for release in 2019. According to the Pensions Dashboard Project, it will “show you what you’ve saved so far” and also “show you an estimate of what that may be worth in the future”.

Economic Secretary to the Treasury, Simon Kirby, said “pensions dashboards will allow consumers to more easily see all their pension information in one place for the first time and I’m delighted with the prototype system the industry has created.

Harnessing the power of technology to give people easier access to their information will help them to be more informed when planning their retirement – one of the most important financial decisions in a person’s life.”

The Pensions Dashboard Project have been working with the support of the government to make the dashboard a reality. The government have also worked with the Association of British Insurers to produce a prototype for the dashboard, which was released in the spring this year.

When accessing the pensions dashboard for the first time, you will be asked to confirm your identity using a secure verification process. You will then be asked if you give permission for the dashboard to share your information with numerous pension providers in the UK.

Once you have successfully signed in, the pensions dashboard will access around 80million pension pots to find any which match your details. These will then be shown on your dashboard. According to the prototype, you should also be able to click on each pension to view further information and contact details for the pension providers.

While the pensions dashboard is designed to help people keep track of their pensions and avoid losing money in unclaimed savings, there have been concerns raised about privacy and the protection of personal information. The Pensions Dashboard Project say “we know that privacy is important. Keeping your personal information safe will be a priority for all of the pensions dashboards.”

The digital verification process is said to be key to the success of the dashboard. In order for the Department for Work and Pensions to provide the dashboard with information on the state pensions for each individual in the UK, it is vital that security is immensely strong and secure.

What do the professionals say?

Tom Selby, Senior Analyst at AJ Bell, said “allowing savers to see all their pensions in one place would be a welcome step forward and should help boost engagement with retirement saving. However, we need to be realistic and not treat this as some sort of panacea that will solve the savings gap in the UK.

“It is important policymakers are ambitious in building the dashboard and make it as useful for consumers as possible. The initial plans do not include “crystalised” pensions where the individual has already started taking an income, for example through drawdown or buying an annuity. This feels like a mistake.

“A solution which excludes pensions in payment is completely inappropriate in a world where people have multiple pension pots and are increasingly likely to trigger pensions in only one of a number of schemes using the pension freedoms.

“The government should also take a lead by including public sector pensions in the dashboard and, over time, consider expanding its scope to include other types of savings products such as ISAs and particularly the new Lifetime ISA which has a specific retirement element to it.”

The CEO of the People’s Pension, Patrick Heath-Lay, said “the pensions dashboard has the opportunity to change the way that we do pensions, delivering an infrastructure that has the potential to allow people the opportunity to see all their pensions in one place whilst driving greater efficiency within the pensions system. But it must be built first and foremost for savers and have strong, independent ownership and governance.

“It is great that the government and industry are working together to make this a reality. It is crucial that we all make the most of this opportunity and the industry as a whole embraces the dashboard.”

Earlier this year a prototype was released, showing just how the dashboard will look and function. Take a look at the video below which gives an in-depth breakdown of the prototype: