Skip to content
Published: 20/10/2017 and written by Natasha Krovak

The Great Depression is a moment in time which will forever remain in the history books. Millions, possibly even billions, of people were affected by this enormous financial catastrophe. As the 88th anniversary approaches on the 24th October, Mr Lender took a look at just what caused the Great Depression and how the world has learned from it. 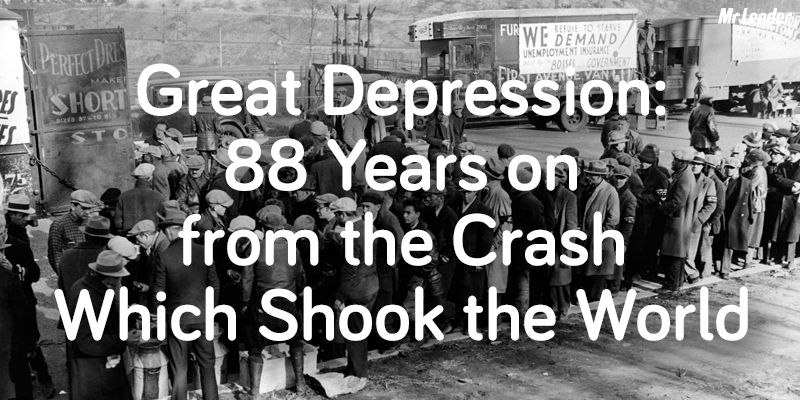 What caused the Great Depression?

While the stock market crash of 1929 is arguably the root cause of the Great Depression, there are a number of factors – both domestic and worldwide – which led to one of the worst financial crises the United States and the world has ever faced.

In the lead up to the Great Depression, America was flourishing in the aftermath of World War I while the rest of Europe struggled to recover. Spending was rife and life was great for many Americans. The ‘roaring twenties’ were born and people began investing their money into stocks and shares.

In the summer of 1929, the US began to enter a mild depression. Production and spending slowed and the unemployment rate soon rose. Stock prices were then left much higher than their actual worth, causing investors to become nervous and begin selling their stocks. On 24th October, what was soon to be known as ‘Black Thursday‘, 12.9million shares were sold in one single day. Stock prices continued to fall, and a further 16million were sold on 29th October – ‘Black Tuesday’. Within the two months following the crash, a total of $40billion was lost on the stock market.

The stock market crash gave way to a fall in consumer confidence, meaning fewer people were spending and investing their money. This led to many companies needing to make reductions in their workforce, meaning many people who had made purchases on credit were then unable to make payments and began to have their possessions repossessed. The banks soon began to fail and by the 1930s, more than 9,000 banks were out of business. Bank deposits were uninsured which meant people simply lost all their savings when the banks went bust. The banks which managed to survive ceased lending and the economy began to shrink. Much like in the lead up to the 2007 Financial Crisis.

As the US entered into a recession, the national unemployment rate rose above 25%, wages fell by 42% and the national GDP fell from $103billion to $55billion. Industrial production fell by 45% between 1929 and 1932, while house building fell by 80% during the same period. By 1931, more than 6million Americans were out of work. While many people were believed to have fallen ill as a result of starvation caused by the Great Depression, 110 people lost their lives.

In a bid to try and protect American businesses, the Smoot-Hawley Tariff was introduced. This meant a higher tax was charged for imports, leading to a significant fall in international trade – 65% to be exact.

While Americans across the country were simply trying to keep afloat amid the beginnings of the Great Depression, farmers in the Midwest were facing another problem entirely. As a result of overcultivation and a severe drought, many farmers were forced to sell their farms and head to California to look for work. Homelessness increased dramatically and plenty of people were forced to live on the streets. Others chose to live in shantytowns known as ‘Hoovervilles‘.

How did America recover?

In 1932, Franklin D Roosevelt was elected president. He then went on to create a number of deals and programmes in an attempt to curb the Great Depression and save America. One of these was a four day bank holiday to allow the banks time to reform and to reopen when they were stable. Many people say his attempts were successful and led to the beginning of the end of Americas financial struggles, however others argue that it was World War II which caused the end of the Depression.

How did the Great Depression compare to the 2007 Financial Crisis?

One way in which the Financial Crisis was worse than the Great Depression is that the initial freefall was far steeper in 2007 than that of 1929. Reports show the economy fell by 54% from October 2007 to March 2009, while the economy in 1929 fell just 45% in the first year and a half. The decline in share prices and world trade was also worse in 2008 than that of 1929.

Eric Rauchway, a historian at the University of California Davis, said “the overall banking situation was much worse in 1933 than it was in 2009, but it is probably true that modern financial institution and technology meant that the crisis spread further and faster than it did in the late 1920s and early 1930s.

In short, it’s hard to determine whether the Financial Crisis of 2007 was worse than the Great Depression or not as there are a number of factors to take into consideration. However both crises have at least one thing in common – an oversupply of goods was one of the root causes of the economic collapse. During the Great Depression it was the oversupply of stocks, shares, cars and household appliances being bought on credit which led the country into a recession, while in 2007 it was the oversupply of loans and homes.

Will we see another Great Depression in our lifetimes?

While another recession is all but guaranteed, a financial crisis of the scale and magnitude of the Great Depression is unlikely. Many people are concerned that changes to trade as a result of Donald Trump’s policies and Theresa May’s plans for a Hard Brexit could have a negative effect on the global economy and may be the cause for the next recession. The current state of the Chinese economy is also a cause for concern, as national debt now stands at 250% of the country’s GDP and continues to increase at an alarming rate.

Is it possible to pre-empt a recession and prevent it entirely? Not at all, but it is possible to take the necessary steps to be financially prepared for when one does hit.