2018 marks quite an historic year for the UK, as we celebrate 100 years since some women were given the right to vote. A lot has happened over the last century, and many women around the world today are living quite a different life to that which was lived by the Suffragettes in the early 1900s. To celebrate, Mr Lender investigated how the Suffragettes managed to make such a momentous change and shape history for women across the UK forever. 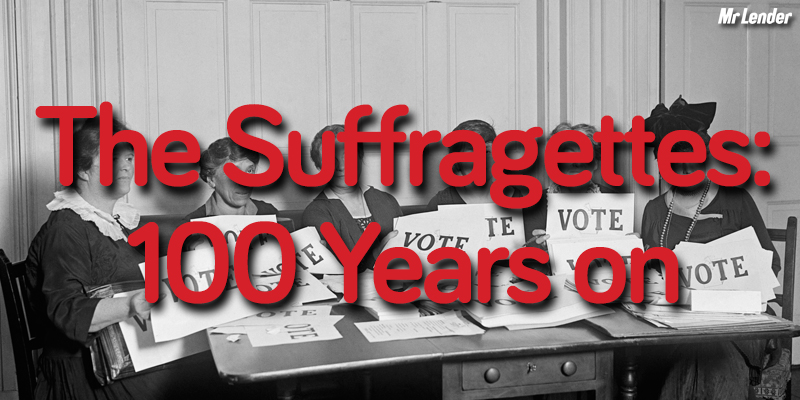 How did it start?

After 50 years of campaigning, a Bill was proposed in 1912 to give women the right to vote, however it was voted against by MPs. A lot more campaigning ensued, and the now infamous suffragettes fought for their right to vote. On the 6th February 1918, the Representation of the People Act was finally passed, granting certain women the right to vote. Initially, only women aged 30 and over, had been to university, owned property or were married to someone who did, were able to vote. On 21st November 1918, the Parliament (Qualification of Women) Act was passed, allowing women to stand for parliament for the first time, and three weeks later, on 14th December 1918, women were allowed to vote in a general election for the first time.

Who were the Suffragettes?

The fight for women’s suffrage first began with the Suffragists in the 1860s, who used peaceful campaigning methods to get their message across. People began to get frustrated at the lack of action being taken, and so it was noted that a more militant approach needed to be taken – leading to the rise of the Suffragettes. The name ‘Suffragette’ was in fact coined by the Daily Mail newspaper.

The Suffragettes were made up of many different campaign groups, all of which were fighting for the same cause. The Women’s Social and Political Union (WSPU) was notably one of the most famous of the groups, though there were plenty of others including the Tax Resistance League. The Tax Resistance League did as their name suggests and refused to pay taxes, arguing that as women didn’t have the right to vote they shouldn’t have to pay taxes. Their rally cry was “no taxation without representation”.

Sophia Duleep Singh, the daughter of an exiled Indian Prince, and godchild to Queen Victoria, was involved in the Tax Resistance League, and was faced with the bailiffs on many occasions. The bailiffs would take her things and sell them at auction, but other members of the Tax Resistance League would go to the auctions and buy back her belongings.

More than 1,300 Suffragettes were thought to have been arrested during the campaigns, and many of them were sent to prison. One of the most prominent figures at the time was Emmeline Pankhurst, who was jailed and released 11 times during her time campaigning for The Cause. In 1903, Pankhurst founded the WSPU. Tactics used by the group were to cause civil disobedience and disruption. One such move involved rushing parliament in October 1908. More than 60,000 people joined the Suffragettes in an attempt to invade the House of Commons, but the police managed to hold them back. Another prominent figure in the fight for women’s votes is Emily Davison, who was killed after she threw herself under the King’s horse at the Derby, and Edith Garrud who taught members of the WSPU Jiu-Jitsu.

The Suffragettes carried out a whole host of disruptive measures in their fight for suffrage, including chaining themselves to railings, disrupting public meetings and damaging public property. When the Suffragettes were arrested, they would often resort to hunger strikes which led to them being force fed. After more and more people turned to hunger strikes as a means of protest, the Prisoners Temporary Discharge for Ill-health Act was passed, also known as the Cat and Mouse Act. This allowed the authorities to release prisoners when they became too weak from hunger strikes, and then re-arrest them when they had recovered.

In 1914, the Suffragettes put their campaigning on hold to support the country’s war efforts. Shortly before the end of World War 1 in 1918, the Representation of the People Act was passed. However, as only a handful of women were given the right to vote, the fight continued for many of the Suffragettes until, finally, in 1928 the right to vote was granted to women of all ages and backgrounds.

Even in 2018, the Suffragettes are branded ‘criminals’ on paper and there have been multiple calls for them to be pardoned. Home Secretary, Amber Rudd, has said that she would ‘take a look’ at giving pardons to women who were jailed during the fight for women’s suffrage, but that it wasn’t ‘straightforward’.

After the right to vote was granted to some women in 1918, a number of changes ensued and women found they were finally being given the same rights as their male counterparts. The year after the Representation of the People Act was passed, the Sex Disqualification (Removal) Act was implemented, which stated that ‘no one could be disqualified from a public function or from holding a civil or judicial office or post based on their gender’.

Shortly after, the Matrimonial Causes Act introduced in 1937 meant women were given the same rights to divorce their husbands as men had to divorce their wives.  More than 50 years after women were given the right to vote, the Equal Pay Act was brought to the UK, meaning it was illegal for employers to pay staff in identical roles differently based on their pay. To further eliminate the gender pay gap which still exists in part today, a new law is coming into place in April 2018 meaning all organisations who employ more than 250 people “will have to publish the gender pay gap of their employees for all four quartiles of their workforce”.

Women’s voting rights across the world

While the UK made the first steps to giving women the right to vote in 1918, we were not the first nor the last to do so. In fact, New Zealand was the first self-governing country in the world to allow women the right to vote in parliamentary elections. Women’s suffrage was signed into law on 19th September 1893, and two months later, Elizabeth Yates became mayor of Onehunga – making her the British Empire’s first female mayor.

The US also had their own Suffragettes fighting for a universal right to vote. The National Women’s Party was founded in 1913, and the Equal Rights Amendment was drafted 10 years later in 1923. The Amendment “stipulated that equality of right under the law shall not be denied or abridged on account of sex.” While the Amendment was put together in 1923, it wasn’t until 1972 that it was passed by congress and sent around to individual states for ratification. On 22nd of March 2017, Nevada became the 36th state to ratify the ERA. States which are still yet to ratify the ERA are Alabama, Arizona, Arkansas, Florida, Georgia, Illinois, Louisiana, Mississippi, Missouri, North and South Carolina, Oklahoma, Utah and Virginia.

While the US began to give women the right to vote fairly early on, Switzerland was somewhat behind the times. Women weren’t given the right to vote in Switzerland until February 1971. A referendum was held on the matter in 1959, but it was reportedly rejected by the majority of the country’s men. Incredibly, women have only been allowed to vote in the Swiss region of Appenzell Innerrhoden for 27 years after they were granted suffrage in 1991. Even today, there is still a traditional review in Switzerland that women should only work part time – especially if they’re married.

While the inequality between sexes has somewhat diminished across the world, it still exists in some form or another in many countries. In the UK, the gender pay gap is still a massive issue, as outlined in recent reports from the BBC. According to the Office for National Statistics (ONS), men earned 18.4% more than women as of April 2017. While this has fallen quite dramatically from the 27.5% gap in 1997, it is still an issue which needs to be addressed. Reportedly, discrimination against mothers is one of many driving forces behind the pay gap. The Equality and Human Rights Commission found one in nine new mothers were either dismissed from their roles, made redundant or treated poorly to the point where they felt the need to leave.

With steps being taken this year to further diminish the pay gap, the centennial celebration of women’s suffrage could coincide with further celebrations for women’s rights in the UK and around the world.