Whether you’re a royalist or not, it’s practically impossible to stay away from the wedding hype surrounding Prince Harry’s and Meghan Markle’s upcoming nuptials. With just weeks to go until the big day, Mr Lender investigated just how much the royal wedding is expected to cost and who will be footing the bill. 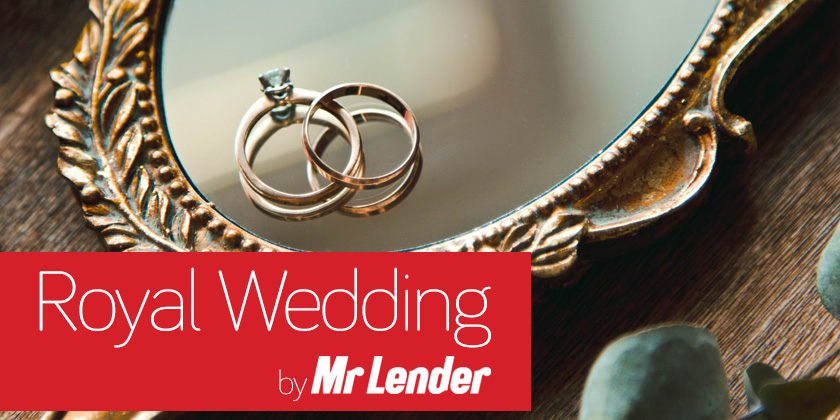 After it was announced back in November that Prince Harry had proposed to his girlfriend of 15 months, Meghan Markle, rumours began circulating surrounding all aspects of the wedding, from the choice of venue and entertainment, to the guests and – of course – who would be designing the wedding dress. But the one question on most peoples’ lips, is how much will it cost?

Well, Hamish Shephard, the CEO of wedding planner app Bridebook, has estimated the total cost of the wedding to be around £2million – not including the additional £30million for security. Shephard, who has organised high profile weddings such as that of Made in Chelsea’s Millie Mackintosh and Hugo Taylor, said “the biggest cost of the wedding is always determined by the number of guests. You have three costs: a third is on the venue, a third is on the food and drink, and a third is on the other parts such as the dress and the photographer, etc.”

Considering Harry and Meghan have an estimated 4,000 guests attending their wedding, it’s safe to say the wedding is set to cost a rather hefty amount. Shephard said, “[Harry and Meghan] are having their church service at the incredible St George’s Chapel, and then they’re with 600 guests for a lunchtime reception at St George’s Hall – one of the most incredible halls in Windsor Castle. The grand evening reception will also take place at Frogmore House.”

Of the 4,000 estimated guests at the wedding, 2,640 of them will be members of the public, all of which will receive a sausage roll and a cup of tea on the day. Shephard estimated that this will add a further £26,000 to the wedding budget.

Being part of the royal family of course has its perks – one being that the venue itself will be free for Harry and Meghan. The couple are also reportedly spending £30,000 on a glass marquee for the grounds of Frogmore House to cater for their 200 guests at the grand evening reception.

While the venue, dress and photographer are some of the largest expenses when planning a wedding, the cost of flowers most certainly bumps the bill up quite considerably – and having multiple venues only further adds to this cost. Shephard said, “all these different venues mean they will have an enormous number of flowers. Everything is going to be the best of the best, and something like floristry is where your budget grows, a massive amount of it goes on flowers, meaning they’ll cost at least £110,000.” A further £90,000 is also said to have been spent ordering 20 silver plated fanfare trumpets for the Prince and his new wife’s arrival.

Aside from the free venue, the couple will also not have to fork out for transport as the Queen has her own fleet of Rolls-Royces, Daimlers and Bentleys. Though as the new royal was born in California and her family currently reside in the States, transport will be provided to bring her family over for the wedding. It would be incredibly difficult to guarantee privacy for Prince Harry’s in-laws if they were to board a standard flight from America to London, so a private chartered flight is likely to be used instead – costing around £70,000.

Aside from the £2million cost of the royal wedding, an additional £30million will be spent on security on the day. The Standard said, “it is believed that besides the usual snipers on every rooftop and undercover police on the streets, the wedding will be fitted with the latest military technology including a British counter-UAV system, which will cost at least £1million”. It has been said that the location of the royal wedding has bumped up the price of security for the day. Shephard says Windsor has a larger security issue when compared to London. He said, “the former head of the Metropolitan Police said that they are very experienced in London and have 10 times the security and are used to all of this. In Windsor, they are not quite used to having the world focus on it.”

Around 5,000 officers were on duty guarding the public at William and Kate’s wedding seven years ago, and the same amount is expected to be present on the day of Harry and Meghan’s wedding this month. Head of Royal Protection and Chief Superintendent of the MET Police, Day Davies, said, “in the last thousand years there hasn’t been a king or queen that someone hasn’t tried to murder. Thousands of people will be working on keeping the family and their fans safe. This is a time to be extremely prudent and sensible. Every precaution needs to be taken”.

Food, drink and the cake

Back in March it was announced that pastry chef, Claire Ptak, would be baking an elderflower cake for the royal couple, costing them a whopping £50,000. The lemon and elderflower buttercream sponge, which will reportedly need to be around eight tiers in order to be able to give a slice to all 800 guests. It has also been said the couple may need more than one cake in order to provide enough for everyone. So how can a cake shop owner in Hackney find themselves baking for the royal wedding? Well, Markle apparently interviewed the California-born chef for her former lifestyle website, The Tig.

The food alone for the wedding is set to cost more than a quarter of a million pounds, standing at around £286,000. This will cover the cost of the food, chefs, staff and crockery hire. The Windsor site said, “we expect roughly 1,700 bottles of vintage champagne to be served throughout the day and at least 650 bottles of wine, whisky and cocktails to accompany dinner and dancing.”

One of the most speculated parts of the wedding is, of course, the wedding dress. Rumours have circulated that the dress could cost between £300,000 – £400,000, however Royal Expert, Katie Nicholl says these estimates are “widely inaccurate”. She said, “there have been reports that Meghan’s considering spending hundreds of thousands of pounds on a wedding dress. I think that’s incredibly unlikely.”

Nicholl says it would apparently “send the wrong message to wear a dress that could upstage Kate’s which was rumoured to have cost £250,000.” It was also reported that due to Meghan’s “cool” and “understated” demeanour, she “might pay in the £60,000 range for her dress”. It is also expected that Meghan will change into a second dress in the evening. It has also been said that Meghan will pay for her own dress, as Kate Middleton did for hers.

Predicted to cost around £120,000, sources have claimed that Meghan will be paying for the honeymoon herself as a gift to Harry. It hasn’t yet been revealed where the couple are likely to head for their honeymoon, though it’ll no doubt be somewhere lavish due to Meghan’s previous experience as a luxury lifestyle blogger.

A number of other estimated costs include the following:

The cost of the wedding

While Prince Charles is said to be footing the bill for most of the wedding, British taxpayers will be covering the £30million security bill. However, while many will argue that this too should be paid for by the royals, the day is expected to bring in £500million for the UK economy due to the amount of tourism generated from the event. If you’re interested in finding out just where the royals get their money from, a quick internet search will provide you with a vast amount of information (note: beware, this search will lead you on a cycle of questions, followed by answers and yet more questions).

The Metro says, “Meghan’s family can breathe easy as Prince Charles is covering the cost of the wedding. The actual ceremony and day reception will be very formal following all the traditions of a wedding and royalty. However, the evening ceremony will have no rules to follow and will allow the couple to show off their personalities in any way they like.”

Royal Commentator, Richard Fitzwilliams said, “it is important to remember how unique our reputation for ceremonial is and what the world expects when watching a British royal wedding. The audience for Harry and Meghan’s wedding will be absolutely vast as we welcome our first American princess.”

Shephard said, “Harry and Meghan’s wedding is likely to be one of the most iconic weddings in history. Their wedding is the mixing of two incredible time periods. Whilst Harry represents the endless history of the British royal family, Meghan personifies the modern day phenomena of celebrity.”

The Royal wedding will take place on Saturday, 19th of May 2018.