Skip to content
Published: 19/01/2018 and written by Natasha Krovak

As of Saturday, 13th of January, new regulations came into play which mean it’s now compulsory for banks to share your details with other providers. This new reform has been implemented in a bid to encourage competition and help consumers to get better deals on financial products. But according to Which?, a staggering 92% of people surveyed had not heard of Open Banking. Mr Lender put together a quick guide to help you get to grips with Open Banking. 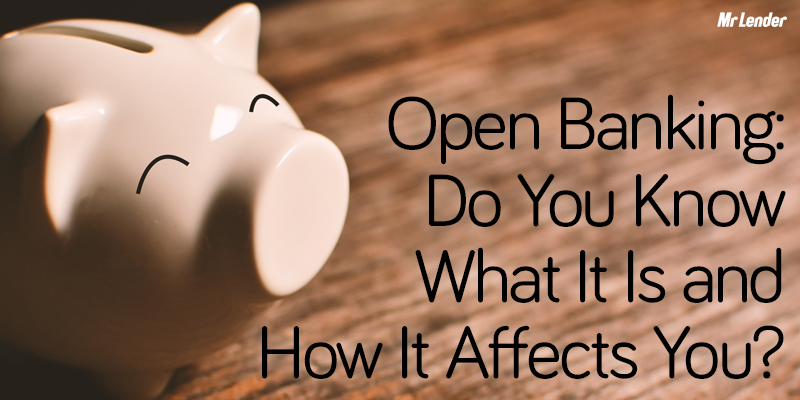 What is Open Banking?

Open Banking is a reform being implemented across the European Union. In 2016, the Competition and Markets Authority (CMA) found that older, more established banks don’t have to work so hard to get new business, while smaller, newer banks may find it hard to grow and access the market. The general idea is that by having the option to allow your bank to share your details with other providers, they will be able to get a better picture of your spending habits and be able to offer a more personalised service which should ultimately result in a variety of cheaper deals being offered to you.

OpenBanking.org says “Open Banking enables personal customers and small businesses to share their data securely with other banks and with third parties, allowing them to compare products on the basis of their own requirements and to manage their accounts using regulated third parties to provide new and innovative payment services.”

One way in which the new Open Banking reform could be used is that if you have multiple accounts with different banks, you may one day be able to open your banking app and see all your accounts in one place – regardless of who you bank with. It means that customers who authorise third parties to access their details will be able to use their services without providing any online banking login details.

Chief Money Analyst at MoneySavingExpert.com, Helen Saxon, said “the idea of Open Banking is that it opens up data on your banking transactions. You’ll be able to share it with whoever you wish, the idea being that if companies know what you’re spending, they’ll be able to analyse the data and guide you to better deals, or better ways you can use your money.”

While it is compulsory for your bank to offer the option of sharing your details with third party providers, they can only do so with your permission. When signing up for a new product or service you will be asked if you want your details to be shared. Any company asking for your details must also be registered with the Financial Conduct Authority (FCA). You also have control over what information you want to share with the third parties and how long you want the information to be stored for too.

What are the risks?

There are plenty of benefits to the new Open Banking reform, including the fact that if you pass your banking details on to a third party which turns out to be fraud, the risk of you having to pay for it yourself is drastically reduced. Helen Saxon also said “there are a lot of unknowns. The law changes on 13th January, but that’s just the start. There are already a few apps, like those that aggregate all your financial accounts or scan your current account and work out how much you have spare to save, then save it for you, which will benefit.

“This is because you’ll no longer be breaking your banks’ terms and conditions by sharing your login details with a third party, so the risk of you having to pay for any fraud resulting from this is removed.”

While there are most definitely many benefits to Open Banking, it doesn’t come without its risks. Gareth Shaw from Which? told The Sun, “while open banking has the potential to offer customers more control over their finances and boost choice, it also comes with a potential risk around data privacy and security.” He went on to say, “regulators and the industry must ensure that customers are protected from data breaches and scams, which is vital if consumers are to use these services with confidence and trust.”

While Gareth Shaw has questioned the risks around data privacy and security, he does welcome the move. He said “switching rates are still relatively low and that is because people have not been able to see what is in it for them, personally, and Open Banking has the potential to do that, to personalise your ability to compare current accounts and say ‘I’m £1,500 into my overdraft two weeks in the month, I am not getting the best deal, I’ll switch to the bank that does give me the best deal’ or ‘I am in credit by £1,000 every month, I am not getting the best deal from my new provider, I will switch to a new provider.”

Shaw does also say that while the move is great for consumer choice, there are plenty of things to be mindful of. He said “consumers could find themselves in a complicated chain of providers. If you authorise one third party to access your money, and if there are potential losses, where does that fall?

“I think data regulators and financial regulators need to be really clear with consumers about how that is going to work. In order for consumers to really engage with this, they need to be confident that there are safeguards in place to protect them. There has been good progress on that.”

If you want to find out more about Open Banking and how you could be affected by it, OpenBanking.org have a handy online booklet to explain the processes and what it could mean for the future.